The Mazda (MX-5) Miata is one of the most notable cars in the Mazda lineup since its debut in 1989. According to the Guinness Book of World Records, the Miata is the best-selling two-seat sports car in history. As of 2016, Mazda has sold over one million Miatas. The Miata is known for its lightweight and incredible handling. Its front-midship rear-drive configuration with the engine positioned ahead of the driver but behind the front axle allows for 50:50 weight distribution contributing to its remarkable handling. With Mazda’s SKYACTIVE engine technology, the Miata contains a high-revving fuel-efficient engine that seeks to reduce emissions.

The Miata comes in three configurations: Sport, Club, and Grand Touring. The Miata boasts several prestigious awards, such as Sports Car International’s “Ten Best Sports Cars of All Time” and has appeared in the Car and Driver “10 Best” list 17 times. Although not known for its spacious cargo capability, the Miata has not failed to live up to its name’s meaning of “reward” for the Mazda Motor Corporation.

A car’s engine is almost as unique as the difference between you and me. The Mazda Miata’s SKYACTIVE engines are no exception. Cylinder head replacement for Mazda engines should be chosen based on the car’s specific make, model, year, engine size, engine material, engine enhancements and car application. The cylinder head is the part that sits atop of the engine protecting its components and providing the correct amount of vacuum to allow the engine to work. The cylinder head works along with other engine parts, such as, the camshaft, induction and exhaust systems to process fuel, air, and exhaust. A crack, dented or leaking cylinder head requires prompt replacement as monumental engine damage is sure to follow. Choosing the wrong cylinder head can also cause costly damage to your car’s engine. Cylinder heads vary by size, shape, and quality that is unique to each engine. 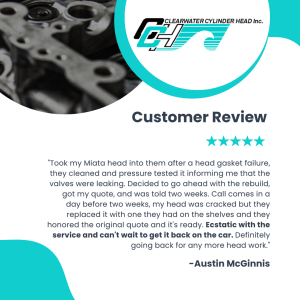