Home Blog How to Tell if Your Cylinder Head is Bad

How to Know If You Need a New Cylinder Head?

Every engine is due for repairs from time to time. Among the most important pieces of most engines is the cylinder head, which, if damaged, can prove increasingly perilous the longer it goes unrepaired. Here are some warning signs and symptoms which may be caused by cylinder head damage.

Cylinder heads are responsible for containing and directing the internal combustion of an engine’s cylinders, meaning if that ability is hindered, the engine’s efficiency and power may take a hit. This can be seen in lower gas mileage, sluggish acceleration, and difficulty getting up steep inclines.

The Verdict: This is most often among the first signs of a cracked cylinder head, and usually can be repaired if caught in its early stage.

Oil is responsible for lubricating the engine’s mechanical parts, including the cylinder head. A cracked cylinder head can cause this to leak, which can be most noticed by a puddle of oil forming on the ground when the vehicle is parked for a long enough time. Such a sign can be a cause for concern, as oil or coolant may also back up into the engine’s internal chambers if the crack is large enough.

The Verdict: Usually, unless oil has backed up into the engine and caused any damage to other parts, a leaking cylinder head can still be repaired and may not require replacement. 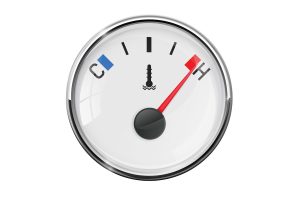 Coolant is responsible for cooling the engine, cylinder head, and many other processes. Similarly to oil, a cracked cylinder head can cause coolant to leak. This can be noticed by either a puddle forming beneath the car when parked or an overheating warning lighting up on the vehicle’s dashboard. Coolant can potentially contaminate the oil, and therefore the cylinder head should be repaired as soon as possible.

The Verdict: Unless the coolant has contaminated the oil due to a large enough crack in the cylinder head, at this stage the head can usually be repaired, not replaced.

Within an engine’s cylinders, air and gas form a pressurized mixture which explodes upon ignition, creating power. A cracked cylinder head may be unable to create the required atmosphere for proper combustion within those cylinders, leading to failures to combust, or engine misfires. The engine may die repeatedly during use, or fail to start at all.

The Verdict: This is a more severe sign, and usually is indicative of serious damage. It’s always better to take a cylinder head in for repairs or replacement if it starts to show signs of wear, to avoid even higher repair bills when the cylinder head’s failure leads to damages elsewhere in the vehicle.

White smoke coming from the engine can indicate a catastrophic failure of the cylinder head, in which exhaust gases are vented directly into the engine space. This is the last stage of total cylinder head failure, and should be avoided by simply going in for repairs at the first signs of damage.

The Verdict: A cylinder head at this stage must be replaced as soon as possible, as it’s either venting exhaust gases or causing coolant to contaminate the oil, neither of which are healthy for any vehicle’s systems.