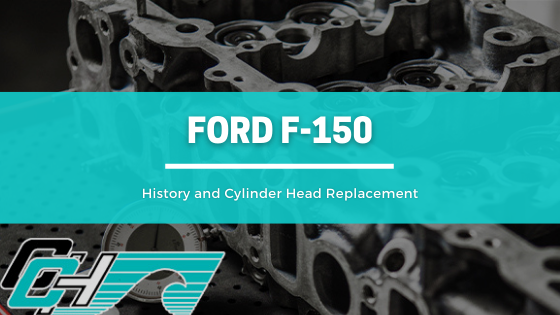 Ford is one of the largest car manufacturers in the world, famous especially for its trucks and SUVs. The Ford F-Series has been in production since 1948, marketing its lighter trucks to the public as robust solutions for work and personal use. It’s been host to many stylistic and functional changes through the years, but among its most standout models remains the F-150.

The F-150 was first produced in 1975, and quickly became one of Ford’s most lucrative series. As of 2017, it has generated more than $41 billion in revenue, making it the best-selling truck in America. With a long history of consumer-first design choices and constant innovation, its popularity through the years is no mystery.

The F-150 Through the Years

Ford recognized the market for trucks was changing, with demand leaning more towards personal use than work use, so the F-150 model was created to cater more to a more casual consumer base. It underwent a drastic remodel for its seventh generation in 1980, introducing a completely new chassis and body design with a focus on fuel economy and longevity.

By 1983, the F-150 was crowned the lightest pickup truck on the market. Soon after in 1986, it was the second-to-last vehicle in the United States to have a 3-speed manual gearbox that shifted using a steering column lever–considered by some to be a superior model of manual transmission, as it allowed more control over the steering wheel and more space for passengers in front bench seats.

In 2004, the series was given yet another remodel for its eleventh generation. With performance and stylistic changes, a sportier version of the F-150 became available. Currently, the series is in its thirteenth generation and has a focus on making a lightweight, efficient, and versatile vehicle that can handle big jobs and still seat the whole family.

The Ford F-150 has an incredible amount of awards attached to its name from numerous different organizations. Some of the awards it has received throughout the year include: 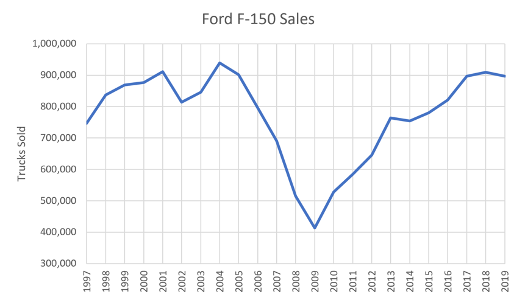 The F-150 series has been the best-selling vehicle in America since 1981.

F-150s are well known for their customizability, with such features as color, engine, bed and cab size, suspension, and more all fully up to the needs of the driver. Their popularity means no shortage of replacement parts or experts to tackle any work you need to get done.

The newest additions to the series can even include smartphone integration and remote control capabilities, including the ability to start the vehicle, lock it, locate it in a parking lot, or check its fuel via an app.

The latest F-150 can come optionally equipped with the Ford Co-Pilot360™ suite of driver-assist technologies, including rear-facing camera, systems that warn you of vehicles in your blind spots or beside your trailer, lane drift warning systems, stop-and-go cruise control, and even collision prevention automatic braking.

Thousands of deadly car crashes each year are caused by human error. Driver assist technologies have introduced new ways of preventing accidents that work alongside driver awareness. The 2020 F-150 is top-rated for safety, and with these new features on the market, it can only continue providing utility, protection, and style for decades to come.

For 6 months, I have been driving the new 2021 Ford F150xl and I’ve put about 25,000 miles on so far. As of now, I only have good things to say. I recently traveled across the country, living out of the back of this truck and it has everything I could have ever asked for. The small v6 engine gives me almost 22 miles per gallon, and the technology and luxury of the base model is matched to none. The eco-boost turbo gives it plenty of power even with it only being a v6. I got the 2-door half cab, and the back seat is almost as big as a four door. This truck is perfect for anything you need to do, and it rides like an SUV. If you’re looking for a daily driver, or a work vehicle, give this thing a test drive.
– Andrew Bruno

As an owner of an older model of a Ford F-150, you may be running into problems concerning its cylinder head. If you notice things such as overheating, white smoke appearing when starting the vehicle, excessive oil consumption, low coolant levels, or poor fuel economy you may be in need of a replacement.

Since a cylinder head can be tricky to replace, please allow us to assist you and get you back on the road with our selection of replacements. With over 25 years of experience and a massive catalog of products, we are dedicated to providing professional and friendly support in all of your cylinder head needs. Feel free to Contact Clearwater Cylinder Head Inc. toll-free at 1-800-572-1963.