The Ford Taurus was a favorite among many U.S. consumers for being reliable and long-lasting. This revolutionary vehicle was manufactured by Ford from 1986 to 2019 with six generations produced over 34 years. The Taurus has a unique / memorable exterior design and offered new interior features that were very innovative at the time.

Right before designing and releasing the Taurus, Ford was in financial trouble. The company was suffering billions in losses and was at a standstill. That was until the President of Ford Motor Company decided to seek a better team approach with the design of their next vehicle. It was at this time that Ford brought in famous statistician W. Edwards Deming, who focused on quality control and customer retention. He developed the statistical process control, which was an efficient / better way to monitor and test vehicle product quality. This technique is still used today by Ford.

The release of the first Taurus model was also the basis for Lincoln Continental’s front-wheel-drive and overall was a trailblazer for future Ford vehicles. The first model of Taurus’s design was inspired by the Audi 5000 and Ford’s European sedan, the Ford Sierra. Indeed, the “jelly bean like shape” was aerodynamic and a factor in better fuel efficiency.

The interior of the Taurus was highly customizable letting customers design it in any way that they wanted with relative ease. The Taurus was America’s best selling car for its first three generations (but quickly lost popularity during its fourth). Ford discontinued the vehicle for a brief amount of time before reviving it for its fifth installment in 2008. Currently, none are being manufactured or sold in the United States. However, the Taurus continues to live on in the China market and was actually just redesigned in 2020. In China the Ford Taurus is positioned as a formal, full-size car and is produced by the joint-venture automobile manufacturer Changan Ford.

The Ford Taurus enjoyed years of awards and accolades displaying the quality of one of Ford’s most prolific vehicles. The initial release was a coveted vehicle and took the world by storm. Although the Taurus achieved many different accolades and awards, the most notable 1986 awards were:

Jumping ahead to the fifth generation, the Taurus was awarded Top Safety Pick ratings by the Insurance Institute for Highway Safety and five-star ratings by the National Highway Traffic Safety Administration (mainly because of the new standard side airbags). In conclusion, the Ford Taurus had a great run in the United States (with millions sold over three decades in the United States) and set the standard for many sedans to follow in the U.S. market. 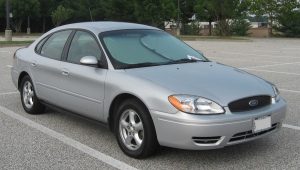 A car that has older models, such as the Ford Taurus, requires regular maintenance checks to make sure that everything is still running in order. Fortunately, Clearwater Cylinder Heads has plenty of head replacement options for you to check out such as this one and even this one.

With pages of cylinder head options, you will find what you need when searching for a new cylinder head for your beloved Ford Taurus.

As an owner of an older model Ford Taurus, you may be running into cylinder head problems. You may need to replace your Taurus cylinder heads If you notice any of the following issues:

Since a Taurus cylinder head can be tricky to replace, Clearwater Cylinder Head Inc. would be more than happy to assist you and get you back on the road with our selection of replacements. With over 25 years of experience and a massive catalog of heads, we are dedicated to providing professional and friendly support for all of your Ford cylinder head needs. We sell cylinder heads to both professional mechanics and auto repair stores as well as the weekend “do-it-yourselfer” who gets inspired by a YouTube “How To” video.