The Ford Transit began production in 1965. This commercial van was initially marketed throughout Europe and Australia as a light, versatile van built on a unified platform of creating the ideal international car — a vehicle that would suit the tastes and needs of many countries all at once with very little difference in manufacturing.

The idea of a “world car or vehicle” became much more popular among car manufacturers toward the end of the 20th century. As people moved more often and traded between countries more frequently than ever before, the need for a versatile vehicle that wouldn’t look out of place no matter where it went only grew. Indeed, vehicles that could meet that desire were seen as more modern and appealing.

This international / global approach turned out to be a tremendous success for Ford. In 1965 when the first Ford Transit (known as the Ford Taunus Transit or the Transit Mark I at the time) made its debut. The first generation Ford Transit looked wildly different from what is recognized today, yet also had the longest-running production, going strong from 1965 all the way up to 1986. (with minimal alterations until a major facelift in 1978) 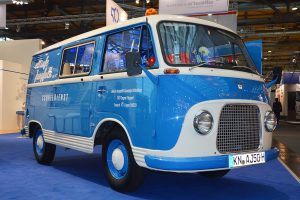 The Mark I, released in the UK, sported an Essex V4 engine in 1.7 and 2.0 L capacities as well as a 43 bhp Perkins diesel engine. Interestingly, while the V4 engine was selected for its short size, allowing the van to have a shorter hood in front while still placing the engine ahead of the driver, the diesel version required a longer hood to fit the larger engine, which earned a nickname as the “pig snout”.

The second generation released onto the market in 1986 and was of particular note due to its “one-box” body design, meaning the windshield and front hood are at close to the same angle. This gave the van its hallmark sloped-front appearance that modern models still have today. In 1989, the 3.0 Essex V6 petrol was replaced with a Cologne 2.9 EFI V6 in accordance with changing emissions regulations.

After being the best selling van in Europe for more than 40 years, in 2013, Ford of North America and Ford of Europe worked together to finally release the fourth generation Transit in America. It was the first time the Ford Transit was available on the U.S. market, and it was a hit, selling over 135,000 vehicles by 2015.

The Ford Transit is now the third best-selling van in America and remains a best-seller in Europe, Asia, and Australia. In 2020, a new iteration of the fourth generation was announced, featuring an option for all-wheel drive which is a first for the Transit. It also sports a powerful 275 hp 3.5L V6 which has come a long way from the first generation’s 1.2-liter inline-four engine. Still widely used for numerous different jobs such as delivery, school bus / transportation, passenger transit, luggage, and much more, the future looks very bright for the Ford Transit.

The Many Uses of the Ford Transit

The Transit has been used in far more applications than simply as a shuttle, cargo or maintenance van. Many Transits, especially in Europe, have been refurbished for use as ambulances, police vans, and other emergency vehicles.

Refurbishing the Transit is amazingly easy with its robust, lightweight design and customizable interior. A movement known as “van life” has grown increasingly popular with young people especially, in which a van or bus is refurbished with a bed, storage space, and other utilities to allow for comfortable living while camping, road tripping, or just exploring the world. The Transit is one of the most popular vans to use for such a project.

Not just beneficial for consumers and businesses, the Transit’s versatility has earned it an interesting infamy as well! In a 1972 Metropolitan Police report, the Ford Transit was named the “perfect getaway vehicle” and “Britain’s most wanted van”. It was found they were used in 95% of all bank robberies due to their capacity to hold nearly 4,000lbs of ill-gotten gains and still be agile and compact enough to go anywhere a normal car can.

Its high weight capacity has also seen it refurbished as ice cream trucks, food trucks, and even other mobile services such as pet grooming, repairs, house-cleaning and much more. The Ford Transit, in many ways, can be an ideal commercial van for almost any enterprise.

The Ford Transit is a powerhouse. Like most vans, regular maintenance and replacing parts will ensure it stays healthy for many miles. It’s not uncommon to hear of Ford Transits that have clocked in more than 200,000 miles while still going strong. In 2014, the highest-mileage Transit ever was sold with a whopping 594,499 miles on its original 10-year-old engine.

Many Transit owners like to compare their numbers on forums such as Ford Transit USA, where some users have reported driving over 100,000 miles every year with few problems. Below, a man describes his 13 years of owning a Ford Transit with 333,000 miles.

Role of Cylinder Heads in a Ford Transit (or any vehicle)

Cylinder heads are an essential part of your commercial vehicle and are what makes sure your engine operates in good health. Located on top of the cylinder block on the engine, this combustion chamber can house components such as the spark plugs, fuel injectors, and valves. In addition, this chamber also houses the intake and exhaust valves to allow air to escape as well as holes to allow coolant from the radiator and oil to flow throughout the engine. If your cylinder head is not taken care of or becomes damaged, then in a worst case scenario it could require you (or your mechanic) to totally rebuild your Ford Transit engine.