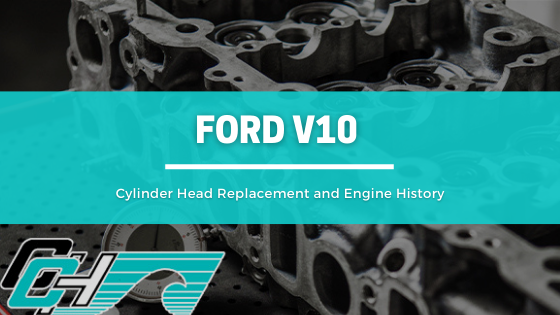 The V10 engine was originally used in primarily Ford trucks as an alternative to diesel. Ford V10 engines were most popular for use in commercial trucks that included motor homes, shuttles and panel vans. It was also found in some 3/4 and 1 ton pickups, medium duty vans and chassis cabs. Because so many trucks and vans in the United States (and around the world) have a V10 engine, replacing and / or rebuilding these cylinder heads is often required as these trucks and engines age.

In 2005 a new 3 valve variant was made available for the V10 that raised the horsepower to 362 and the torque to 460lb-ft in pickups. Two valve versions of the V10 were produced after 2004 but were used only in medium-duty van applications. The V10 is still used today but mostly in medium-duty chassis cabs. A popular vehicle that used the V10 was the 2000-2005 Ford Excursion. Where it was offered as an alternative to the 7.3 liter diesel. It was a step up from the standard 5.4 liter V8. The V10 originally added around 55 horsepower and 75 pound-feet of torque to the Excursion.

Clearwater Cylinder Head Inc. (CCH) is a reputable, experienced (over 25 years) dealer. We specialize in providing quality and warranty-backed rebuilt cylinder heads for a variety of vehicles. With a massive online catalog of heads, you can view CCH’s inventory of Ford V10 cylinder heads. The knowledgeable staff at CCH would also be happy to help you choose the cylinder head that is right for your Ford. Contact Clearwater Cylinder Head Inc. toll-free at 1-800-572-1963.

Putting the Ford V10 Engine Back Together