Home Blog A History and Overview of the Mini Cooper

The Mini is an iconic British creation which has seen prominence in commercials, movies, TV, and other media for much of its history. Its boxy design, small frame, and low-to-the-ground “bulldog” stance makes it a difficult car to forget.

Today, the Mini Cooper occupies a comfortable portion of the market in the UK, Japan, the US, Australia, and other regions, valued for its fuel economy, style, and versatile size that’s a perfect fit for both cramped urban parking and extended country drives. For many fans, the current Mini series is an excellent fusion of nostalgic design sensibilities and modern functionality into one sporty package. Read more to discover its history and unique features.

An Icon 60 Years in the Making

The Mini line of cars was first introduced partly as a result of the 1956 Suez Crisis, which caused fuel shortages and petrol rationing in the UK. Large frame cars fell sharply in the market due to their fuel requirements, while smaller, lighter cars such as the German “bubble car” and the Fiat 500 exploded in sales.

Leonard Lord, the head of the British Motor Corporation (BMC), despised the appearance of the German bubble cars and reportedly vowed to replace them with a “proper miniature car”. He sought the help of Alec Issigonis, who worked alongside a surprisingly small team of engineers and designers towards the project. In 1957, they created the “Orange Box”, an early Mini model.

The Orange Box maximized passenger space within its small frame with several space-saving design decisions. The suspension system used stiff rubber cones built into the subframe rather than traditional springs, giving it a bumpy ride but tight handling. Its 10-inch wheels required the development of new tires, and to further increase passenger room, it was fitted with single-skin doors and a bracing bar which would later be converted to sizable storage bins.

This early Mini was designed for quick, cheap construction, built with a single shell and externally-mounted door and trunk hinges. This made the doors easier to align and attach, and further freed up space for the passengers. Its innovative design made the Mini a rapid success, earning Lord and Issigonis a Dewar Trophy in 1959.

The Mini earned a place in pop culture by the 1960s, as members of the Beatles, Princess Margaret and Lord Snowden, Harry Secombe, Graham Hill, and others. John Cooper, owner of Cooper Car Company and designer of Formula One cars, saw promise in the Mini as a performance vehicle. He collaborated with his friend, Issigonis, to create the Mini Cooper in 1961.

The Mini Cooper had several notable differences from other Mini models. Its engine was given a longer stroke, increasing its capacity from 848 cc to 997 cc and its power from 34 bhp to 55 bhp. With a race-tuned engine, dual SU carburettors, and front disc brakes (unusual in small cars at the time), the Mini Cooper Mark I was a powerful, lightweight model which saw numerous racing achievements.

The model “S” Mini Cooper came onto the market in 1963. Even more powerful than the original Mini Cooper, it featured a 1071 cc engine with a 70.61 mm bore and nitrided steel crankshaft and power braking. Two S models were produced specifically for circuit racing, with 970 cc and 1,275 cc engines respectively. Despite the S models’ additional features, the Mark I Cooper proved to be the most popular at the time, with 64,000 sales.

By the 1990s and 2000s, the Mini was considered highly fashionable, though less popular than more functional models, driven by the likes of Madonna, Kristen Stewart, George Harrison, and others. While the original Minis had gone out of production, the Mini marque, now owned by BMW, launched in late 2000 with the Mini Cooper, a hatchback model with an updated, sleek design that still preserved the familiar shape of the original.

BMW has since then released and improved upon three generations of the new Mini. Its second generation saw cutouts in the back of the front seats for more rear passenger legroom, its rear C-pillars were no longer encased in glass to improve aerodynamics, and an engine start button, as well as automatic car unlocking once the key is drawn close enough, has added modern remote features that are becoming increasingly popular on the market.

The Cooper and Cooper S models are customizable for a number of uses. A Sports kit option upgrades the vehicle’s shock absorption systems and adds anti-roll bars. Both second generation models feature improved electric power steering which can be amplified by a “Sport” button in front of the gear lever. This button also increases the sensitivity of the accelerator, allowing the vehicle to reportedly accelerate from 0-100 km/h in under 10 seconds.

The German Automobile Club rated the Cooper at the top of the small car class in terms of low breakdown rates for cars up to 4 years old, making the Mini an attractive option for customers looking for reliability and a vehicle that lasts.

I bought a Mini Cooper S head. Had a camshaft snap and shipped it back under warranty. Spoke with them, and they called back often. They supplied a fully working unit. I found talking with them worked great. 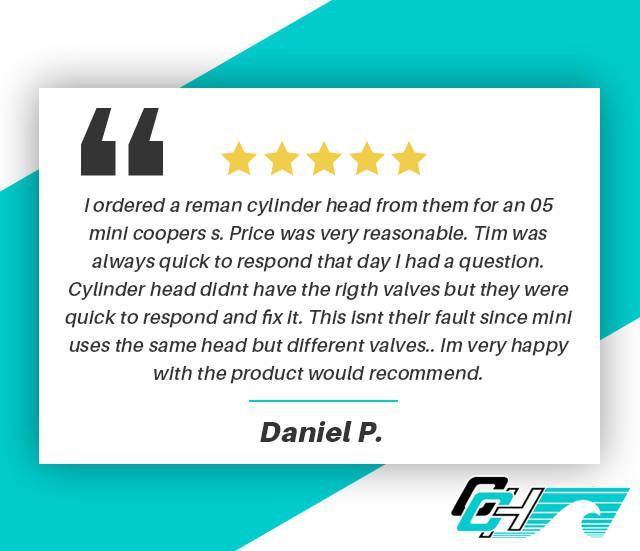 As an owner of a Mini Cooper, you may be running into problems concerning its cylinder head. If you notice things such as overheating, white smoke appearing when starting the vehicle, excessive oil consumption, low coolant levels, or poor fuel economy, you may be in need of a replacement.

Since a cylinder head can be tricky to replace, we at Clearwater Cylinder Head Inc. would be more than happy to assist you and get you back on the road with our selection of replacements. With over 25 years of experience and a massive catalog of products, we are dedicated to providing professional and friendly support in all of your cylinder head needs. Feel free to Contact Clearwater Cylinder Head Inc. toll-free at 1-800-572-1963.