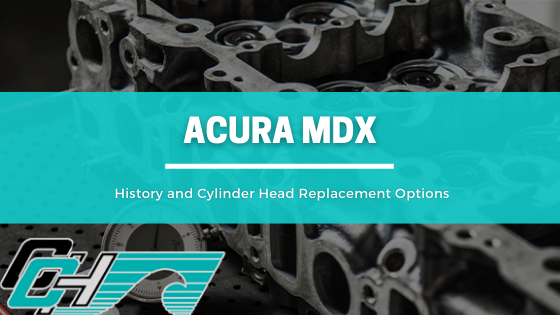 The Acura MDX is manufactured by Honda and is classified as a mid-size three-row luxury crossover. Honda considers this Acura “Multi-Dimensional luxury” to be the best selling three row luxury car of all time (and for good reason). The Acura nameplate is still going strong today with the Honda nameplate lasting from 2003-2006.

The first Acura MDX was released in 2001 to rave reviews and featured a 3.5L SOHC V6 engine delivering 240 HP and a 5-speed automatic transmission. This vehicle was also given the title of an ultra-low-emission vehicle (ULEV) rate car. Throughout the lifespan of this luxury vehicle, many different add-ons were implemented for quality of life, such as auto climate control, cruise control, and keyless entry. In addition, the horsepower increased to 260 HP from 240 HP in 2003.

It wasn’t until 2007 that the more impressive technology started to appear with voice-activated navigation, hands-free Bluetooth capabilities, and voice recognition. The 2007 model also sported an impressive 300 HP with its 3.7L V6 engine (making it top of its class).

The Acura MDX has been awarded by multiple different automotive organizations and publications.

Owners of Acura MDX older models should perform regular maintenance and tune ups to ensure that everything in the engine is running properly. At some point in time, you may need to purchase a new cylinder head for your beloved Acura MDX. Please count on us to keep your vehicle running for years to come. Clearwater Cylinder Head has plenty of replacement options for different models to check out such as this cylinder head and this cylinder head. With pages of options online, you will find what you need when searching for a new cylinder head for your SUV.

The Acura MDX has enjoyed record sales in the U.S. throughout the years. The list below shows their sales numbers stay in the thousands with minimal decreases over time.

When purchasing a vehicle you always check to see what mileage it has if it’s used and how much it can go up to. The higher the average mileage it can reach the more likely it will last and stay working through your use. The Acura MDX is actually identified by iSeeCars to be the longest lasting crossover SUV with 1.5% sold on their website reaching over 200,000 miles. Of course, results may vary!

One man who owns a taxi cab company invested in his business and bought into the Acura MDX hype. He has not regretted it since. He explains with proper care every 10,000 or so miles, these crossovers can last an exceedingly long time. There is documentation that one particular MDX has 946,252 documented miles on it which is incredibly impressive (almost unbelievable) for a crossover SUV.

If you are concerned that the Acura MDX would not run right when it has such a high mileage this man put together a video showcasing his 400,000+ mile Acura MDX and how smooth it runs despite the high number of miles.

As an owner of an older model SUV, such as an Acura MDX, you may be running into problems concerning its cylinder head. If you notice any engine overheating, white smoke appearing when starting the vehicle, excessive oil consumption, low coolant levels, or poor fuel economy then you may be in need of a replacement. Please consult with your local car mechanic to confirm.