What is the Best Selling Car of All Time?

Have you ever wondered which car is the best selling vehicle of all time? Let us give you some hints:

Yes, you are right. It is the Toyota Corolla. The name in Latin means the “coronet of flower.” Nevertheless, history has proven Corolla deserves the biggest crown as it is the king of affordable compact sedans. The Corolla is a humble, quiet soldier that offers dependability and efficiency.

Toyota Corolla has been successful in demonstrating these 3 principles:
Reliability
Affordability
Efficiency

Let’s take a look back at the half-century history of Toyota Corolla across 12 generations to see the secrets of this successful car. 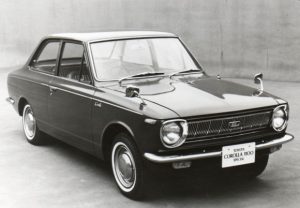 1966 to 1970 – Generation 1 (E10)
Toyota Corolla was initially launched in Japan in 1966 to introduce a new family car that best represents the essence of Toyota’s technology. Available in three body styles, a 2 door coupe, a 2/4 door sedan, and a 2 door wagon, Toyota Corolla was running a 1.1L K inline-4 cylinder engine under the hood and equipped with a 4-speed floor shift manual transmission and a rear-wheel-drive layout. The positive reception of durability and practicality shaped the E10 early success. After only one month, the Corolla surpassed Nissan Sunny, its current main competitor, in sales. Within 3 years of its launch, Toyota Corolla made its way to the export markets, first to Australia (1966) and then to the US (1968). The Corolla quickly became the best selling vehicle in its class worldwide. 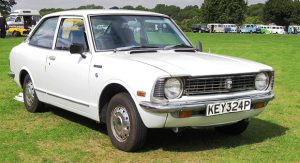 1970 to 1974 – Generation 2 (E20)
Following the success of its predecessor, Corolla E20 was released in 1970 and featured a rounded body. The style was known as “coke-bottle styling”. The 70s was the time for muscle cars in the United States. Adapting to the market demand, the Corolla E20’s engine was available in a wider range of displacement, from 1.2L to 1.6L, depending on the trim level. As a result, the power produced by E20 increased greatly, ranging from 73hp and up to 102 hp (compared to E10’s performance of 60hp to 65 hp). Beside the enhanced performance, the second generation Corolla also featured improvement on the front suspension with the use of a sway bar which provided better handling. With the launch of E20, the Corolla became the 2nd highest selling vehicle worldwide.

1974 to 1981 – Generation 3 (E30, E40, E50, E60)
In 1974, the world welcomed a rounder, bigger, heavier and yes, bolder and more pronounced Corolla. In the third generation, additional body styles were introduced, such as a 3-door hatch-back, sports coupe or van. In terms of powertrain, the 2-door model was equipped with a 1.2L inline 4-cylinder engine while the remaining models received the larger 1.6L engine. An optional 2/3-speed automatic transmission was also available for the first time. Despite the unstable economy caused by the 1973 fuel crisis, Toyota Corolla 3rd generation did very well in the U.S. market. 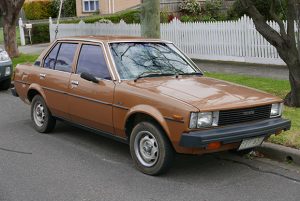 1979 to 1987 – Generation 4 (E70)
The E70 marked an interesting transition of Toyota Corolla revolution. It was the last generation of Corolla to have rear-wheel drive system and iron cylinder head engines while being the first to offer automatic transmissions. At the time when the world was suffering from high oil prices, an impressive fuel economy car like the Toyota Corolla E70 was in demand. By 1983, 10 million Corollas were produced, which surpassed the Volkswagen Golf for production volume. 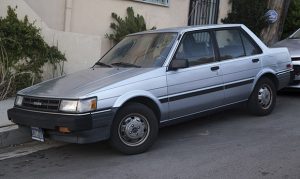 1983 to 1990 – Generation 5 (E80)
The Toyota Corolla E80 was one of the most popular Corollas in history with more than 3 million units produced. The car adopted a front-wheel-drive layout and overhead camshaft engine. E80 brought with it a 124 hp performance that blurred the line between compact cars and sports cars. The 1980s would not have been the same without the Toyota Corolla E80.

1987 to 1991 – Generation 6 (E90)
In 1987 an official complete adoption of front-wheel-drive was made exclusively across the entire range the Corolla E90, marking the ending of the rear-wheel-drive era. The E90’s engines also received a horsepower boost that produced up to 135hp. Wrapped in a more contemporary design, E90 broke the common family car image with a stylish, sporty look and feel.

1991 to 1995 – Generation 7 (E100)
The seventh generation of Toyota Corolla reflected the significant shift in demand of car-buyers then. Car buyers in the early 1990s wanted larger, faster cars, but at the same time safer and quieter vehicles. The Corolla E100 was Toyota’s response. The Corolla came in 6 different engine sizes, ranging from a 1.6L inline-four-cylinder producing 105hp to a 115hp 1.8L engine. There was an increase in all dimensions which made the Corolla now bigger, heavier and more spacious.

1995 to 2000 – Generation 8 (E110)
With a focus on saving energy by reducing weight, Toyota aimed to bring fuel efficiency to the next level while maintaining safety and handling with the Corolla E110. Net power produced was up to 120 hp while gas mileage was 31mpg city and 38 mpg highway. This achievement was made thanks to the installation of the all-new aluminum 1.8L overhead camshaft four-cylinder engine. In addition, new safety features included emergency locking seatbelts, absorption steering column, and SRS airbags. This period also saw the Corolla break the record of the best selling nameplate in the world, surpassing the Volkswagen Beetles in 1997.

2000 to 2007 – Generation 9 (E120, E130)
The Corolla entered the new millennium with the edgier and wider 9th generation, the E120 and E130. While the former was sold only in Japan, Europe, the Middle East, and Australia market, the latter was more tailored to the North American and other Asia markets. As mentioned, E120 and E130’s appearance were more stylish to appeal to the younger generations. Yet, the core value of “top of the class fuel economy” remained the Corolla standard. Powered by a 1.8-liter Inline-4 with 130 hp, Toyota Corolla E120/130 offered versatility, durability, and functionality. 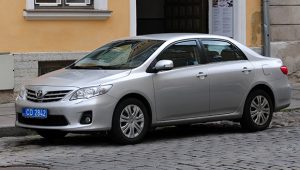 2006 to 2013 – Generation 10 (E140, E150)
The 10th generation of Corolla – E140/E150 marked the 40th anniversary of this legendary nameplate. A total of 5 trim grades, Standard, LE, XLE, S, and XRS, are offered in the US market proving this new model took a more global approach than ever before. While the other four trims were equipped with a standard 132 horsepower, 1.8-liter inline-four cylinder (2ZR-FE), the XRS model received an added powertrain of a 158 horsepower, 2.4-liter engine. There were 3 transmission options available, a five-speed manual, a four-speed automatic or a new five-speed automatic transmission.

Besides power and durability, “safety” was the keyword when it comes to the Corolla E140/E150. Designed with a focus on safety features, namely Vehicle Stability Control, Traction Control, side-impact, and side-curtain airbags, ABS with brake assist and active headrests, the Corolla E140/E150 was given the Top Safety Pick accoladed by the IIHS. 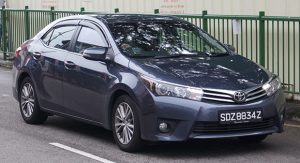 2012 to present – Generation 11 (E160, E170)
To describe the Corolla 11th generation, Shinichi Yasui, the Chief Engineer of the Corolla stated: “I believe this new model clearly breathes the Corolla DNA that has been inherited over a period of 47 years.” With 2 models, E160 for Japan market and E170 for the international market, and four grades available, L, LE, LE Eco, and S, the Corolla Gen 11 represented the beauty of Corolla brand: fuel efficiency, safety features, great engine output for a family car, and reliability. The biggest upgrade made on this generation is the size increased, both on the vehicle itself and the wheelbase, enabled comfortable drives with plenty of room for everyone and their belongings.

2018 to present – Generation 12 (E210)
And here we are to the latest version of the legendary Corolla, the E210. Introduced in March 2018 under 4 variations, hatch-back, sedan, station wagon and hybrid, the 12th generation of Corolla was based on the Toyota New Global Architecture (TNGA) platform has yielded a stiffer, lighter structure with transverse engine and front- or all-wheel-drive. The E210 is considered to be looking better than ever, with a sporty taste hidden behind a sleek design.

Throughout the Toyota Corolla history, we can see that while other automakers have moved on with many other kinds of engine, such as small blocks (Chevrolet) or V6 (Jeep), the entire line of Corolla has been loyal to the inline-4 cylinder engine only, for 53 years. What is so special about this engine? The answer is its design.

As the most common form of engine for hatchbacks and small family cars, an inline-4 engine is when there are 4 cylinders arranged side-by-side in an upright position across the engine bay, perpendicular to the car. While the four cylinders offer a good amount of engine output, the layout allows for a small, compact engine, with other components (radiator, battery, cooling system) fitted around the outside and can be made very powerful with the introduction of a turbocharger. Therefore, the inline-4 cylinder engine is much smoother than 1 or 2 cylinder engines, less costly than 5, 6 or 7 cylinder engines while being more efficient than a 6 or 8 cylinder engine of equivalent displacement.

People love Corollas because they are just simply reliable! However, with the 1998 or 2005 – 2008 models, the common problems reported were “single cylinder misfires” or “cylinder head cover baffle precautions”. Although an engine problem is a usually costly fix, with Corolla – a Japanese car, the good news is that parts are easy to find and affordable to replace or rebuild.

Clearwater Cylinder Head Inc. (CCH) is a reputable, experienced (over 25 years) dealer. We specialize in providing quality and warranty-backed rebuilt cylinder heads for a variety of vehicles (cars, trucks, boats, etc). With a massive online catalog, you can easily view our inventory of Toyota Corolla cylinder heads. The knowledgeable staff at CCH would also be happy to help you choose the cylinder head that is right for your needs. Contact Clearwater Cylinder Head Inc. toll-free at 1-800-572-1963.

How to install cylinder head and intake manifold together on a Toyota Corolla DX 1.8L 7afe

How to check and inspect Cylinder Head Toyota Corolla Dual VVT-i. Years 2007 to 2018